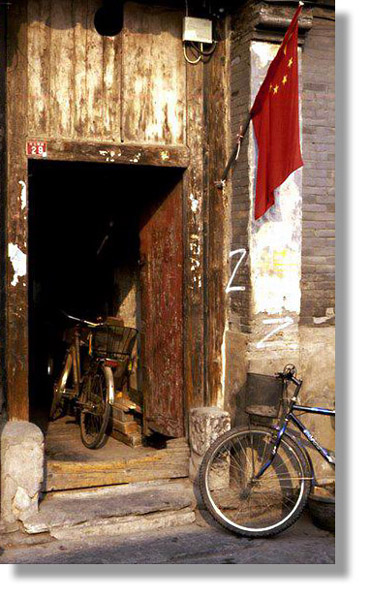 This was in a myriad of alleys in Beijing very close to Tiananmen Square. These areas are called "Hutongs" in Chinese, and the one-story, multi-room brick mazes were they way people in Beijing lived for years and years, and many still do. They are now being demolished fast and replaced with boring, no-character, sub-divisioned apartment blocks, but there were so many in the first place that you can still find some to get lost in. G2/45 Planar, cropped, Agfachrome RSXII 200

To me, the red flag makes this shot. I like the natural looking color, as well; it looks like afternoon light. How much larger was the original frame? -Karl

Not much was cropped out, just some rough spots to smooth out the edges and make the framing a little more pleasant. I really like the Agfa RSX slide films and when I run out of my supply of Fuji/Kodak stuff in the freezer plan on using them more.