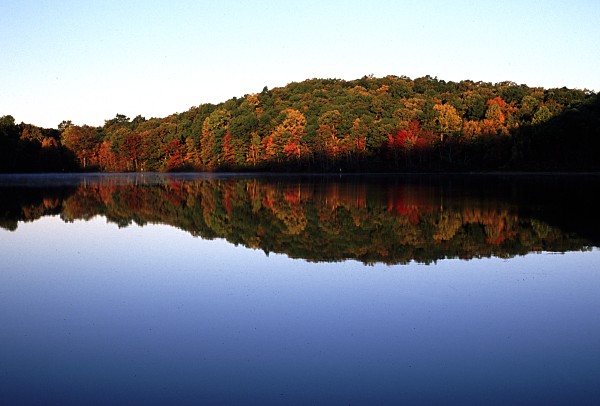 I have been meaning to comment on your pictures for a long time, as I think they are some of the best executed ones on this site. Besides showcasing your great eye, they are always perfectly metered, 100% sharp and DOF-wise very well controlled. Instant classics - calendar shots (which I mean in a completely positive sense).

I like this one very much too. Not sure about the larger foreground helping. My only dislike is a feeling a emptiness to the main subject (mountains and tree colors) that does not help but then again does not hurt necessarily. A very pleasant, very good shot that seems to need one more push, one more ingredient, to really make it a great shot. I think what you really needed, but was not handy, was a more interesting sky!

And I agree wholely with Matthias. Your whole body of work on this site is a great study in ability and diversity.

... yes I second Matthias and Richard here. Great versalitility and great sense of perfection. Curiousity it maybe the word that I would use and that ranges pretty high .... :-)

as I think this image benefits from the large foreground. One of its major qualities lies in the tranquility it transports. The mirror-like, completely undisturbed lake is the element in the image responsible for this. To crop much of it would mean to rob the image one of its major assets. No, I think the image is very well composed. Also look at the nice color rendition of the water! Maybe a square framing in which the bank of the lake marks the exact half of the image?s height would add vertical symmetry and look interesting, but you would need more negative for that.

...for the kind words. I was definitely going for the "serenity" angle in this shot, but I can also see Richard's point about a "central focus" being an added element which could enhance the picture.